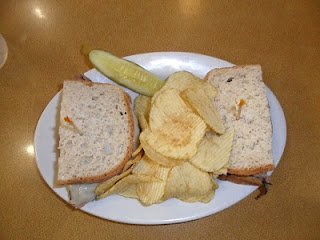 We stopped into Jason’s Deli for lunch on July 3rd. It was our first visit ever to the restaurant. Jason’s in is very busy and when we arrived, we asked about the possibility of getting a gluten-free sandwich a couple of days before the gluten-free sandwiches were to be offered. The manager nicely offered to make us sandwiches on the gluten-free bread himself. I saw the Udi's bag on the back counter shelf and noticed the manager putting on new gloves to prepare our meals.
After checking out the new gluten-free menu (not the one with gluten-free items noted but a completely new menu), I ordered a roast beef sandwich with cheese. I didn’t order any condiments, as I knew they would not have a separate condiment station set up since they were not actually set up to make gluten-free sandwiches that day. The manager made our sandwiches on the opposite side of the line from where gluten sandwiches were made.
The sandwich was less than $6 and came with Ruffles potato chips and a pickle. When the sandwich arrived, I was taken aback at how much roast beef was on it. I ended up eating only half of it and took the other half to go. It was a really good sandwich and meal overall. The bread of course was fabulous as Udi’s bread always is.
The extensive gluten-free menu lists the salad bar items that are gluten-free, which is many of them. However, after checking out what the salad bar looked like, I would only order the salad bar if I was there when the store opened. That way, I could get my food before anyone else got the chance to misplace a serving utensil and contaminate an otherwise gluten-free item. In the area where the croutons were (which is in its very own section on the bar), crouton crumbs were everywhere. This is the norm for salad bars, of course.
There are various ways the salad bars can be set up so that cross contamination issues are kept to a minimum. For instance, the gluten-free dressings can be put in an area where gluten dressings would be very likely to be dripped into them. Hot Stix in set up their food bar with such things in mind so it’s a shame the concept didn’t make it here. As I was not having the salad bar at Jason’s Deli, I didn’t study the placement of everything, but I’d still probably only get the salad bar if I was there when they opened for the day. I have no interest in going to Jason’s for salad anyway, since I can have a sandwich now!
In addition to sandwiches, there are baked potato options on the gluten-free menu and vanilla ice cream with chocolate sauce for dessert. In fact, the ice cream is free (if you order other food, of course) and it’s gluten-free as long as you skip the cone. The location of Jason’s Deli that we visited was shockingly busy. Once we tasted the sandwiches, we understood what all the “hullaballoo” was about. It’s a fun place to grab a quick, reasonably priced and now - tasty gluten-free bite.
Please be aware that gluten-free sandwich service is just being rolled out at Jason’s Deli locations (and might not be available in all stores yet). All locations will obviously not offer the same experience that I had. My food was absolutely gluten-free and the experience was a very pleasurable one. There was no anxiety, but of course, the manager knew I was reviewing the meal online. My advice to anyone interested in enjoying a gluten-free sandwich at Jason’s Deli is to sit where you can see your sandwich being made. This way, you’ll be able to tell if there are two condiment stations set up, etc.
Remember, when Starbuck’s rolled out their ill fated gluten-free cake, many stores opened the individually wrapped cakes and placed them in the gluten filled pastry case. They did this to make the cake “look more appetizing”. Seriously, that is what they did. There will likely be growing pains related to this new venture at Jason’s, so if you see that a mistake was made on your order, don’t accept it. Politely explain what you saw that was done wrong and tell them how to do it right. When and if you do this at any establishment, it’s very important that you speak with a manager. Not a bus person or friendly order taker - a manager. If you don't feel your concerns are being understood then call the corporate office to report the situation.
Jason's Deli didn't go to the trouble of researching gluten-free breads, products and learn about proper gluten-free service to fail at catering to our community. Thinking everything will go perfectly at every location in the early stages of a gluten-free menu roll out is unfair to the company. We know there are many ways they can mess up a perfectly safe meal and if you want them to do it right, you need to correct them if they get it wrong.
I’m super excited to be able to have a wonderful sandwich on delicious edible gluten-free bread when eating out in my area. Hopefully others will support this effort by Jason’s Deli to serve our community. We should all appreciate that enjoying a gluten-free meal at Jason’s Deli is an exceptional value as gluten-free dining options go. And these days, who can’t appreciate a bargain?!

For another take on another Jason's Deli in the Atlanta area, read Anne Steib's detailed review.

UPDATE 10-14-10: Even though for a million dollars I would never have found this menu on Jason's Deli site, their tech support person was kind enough to walk me through it. Word to corporate - get the  menu up in a user friendly way already. People are saying they won't go in unless they can review the menu online first.