On Friday morning we sadly had to say goodbye to Anne and Joe at Chicken Paradise and head to Dallas for the wedding - the real reason for this trip. We had to arrive in Dallas in time to press clothes and change for the rehearsal dinner. Of course I had called the restaurant to figure out what I could eat and it turned out I could eat nothing being served on the buffet...such is the life of someone with Celiac. No problem, they were happy to make me some beef soft tacos (fryer issue) rice and beans. All were checked to confirm they were gluten free. My meal ended up being not only gluten free but pretty darn tasty as well!


As it turns out, when you are driving to Dallas from San Antonio, you drive right through Austin. There is a place there called Wildwood Arts Cafe that has a gluten free bakery onsite and they serve many gluten free dishes as well. They serve lunch so of course we had to go - no question. We'd been warned that traffic in Austin is horrid but being from Atlanta we always think people that say that have no idea what real traffic is. Unfortunately for us (and Austinites), the warning about Austin traffic was accurate. It took forever to get to Wildwood even though it was not that far off the interstate. We arrived during the lunch rush and it was crazy busy so I had plenty of time to figure out what to order while waiting in the long line. We snagged a table (they don't have many there) and waited for our meals to arrive. I had pork tamales with rice and beans and my meal was outstanding. My husband ordered some kind of sandwich and said the rice bread it was made from was ok. 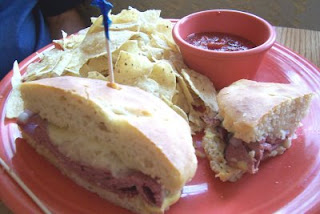 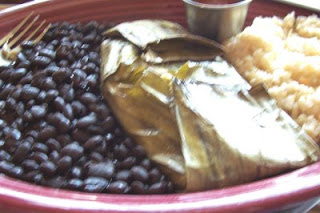 When it was time to pick a dessert from the massive gluten free offerings, I started reading ingredients and realized most things there seemed not only to be gluten free but dairy free as well. Some of my favorite treats are made with canola oil and not butter so I was not completely scared away. I chose a cookie to have later (it wasn't good) and my husband chose the brownie, which was made with margarine instead of canola oil. I'm sure at some time I've had a worse tasting brownie but I'm not sure what or when that was. I could not believe my husband ate the whole thing after admitting he didn't like it...but he couldn't bring himself to throw it out.
For the following morning I needed something to eat in the room unheated so I chose a pumpkin muffin. My husband chose a blueberry breakfast bread which was huge. Considering the traffic delays and the quality of the baked goods, I would not bother returning to Wildwood if I was ever in Austin again. There are more places in the area than Wildwood that can provide safe gluten free meals. You'll find them on the Celiac Alamo site.
The pumpkin muffin turned out to be the best thing we bought at Wildwood and I should have gotten a few more. The blueberry breakfast bread was inedible except for the blueberries that my husband literally picked out of it...he had some protien bars to supplement his breakfast as there wasn't time for him to get service in the hotel cafe at this point.
Like another well known 'almost' gluten free bakery in NYC - I don't get what all the fuss is about regarding Wildwood Cafe. I can make better gluten free baked goods at home and I'm no baking expert. I just use the very best mixes on the market and that doesn't take much skill - except to find said mixes. I guess people accept these less than stellar tasting items just because they don't want to make every single cookie or piece of cake at home, and for that I don't blame them. But for me, if something isn't good enough for a discriminating glutenoid to eat, I usually don't like it. Life is too short to eat bad food - gluten free or otherwise.