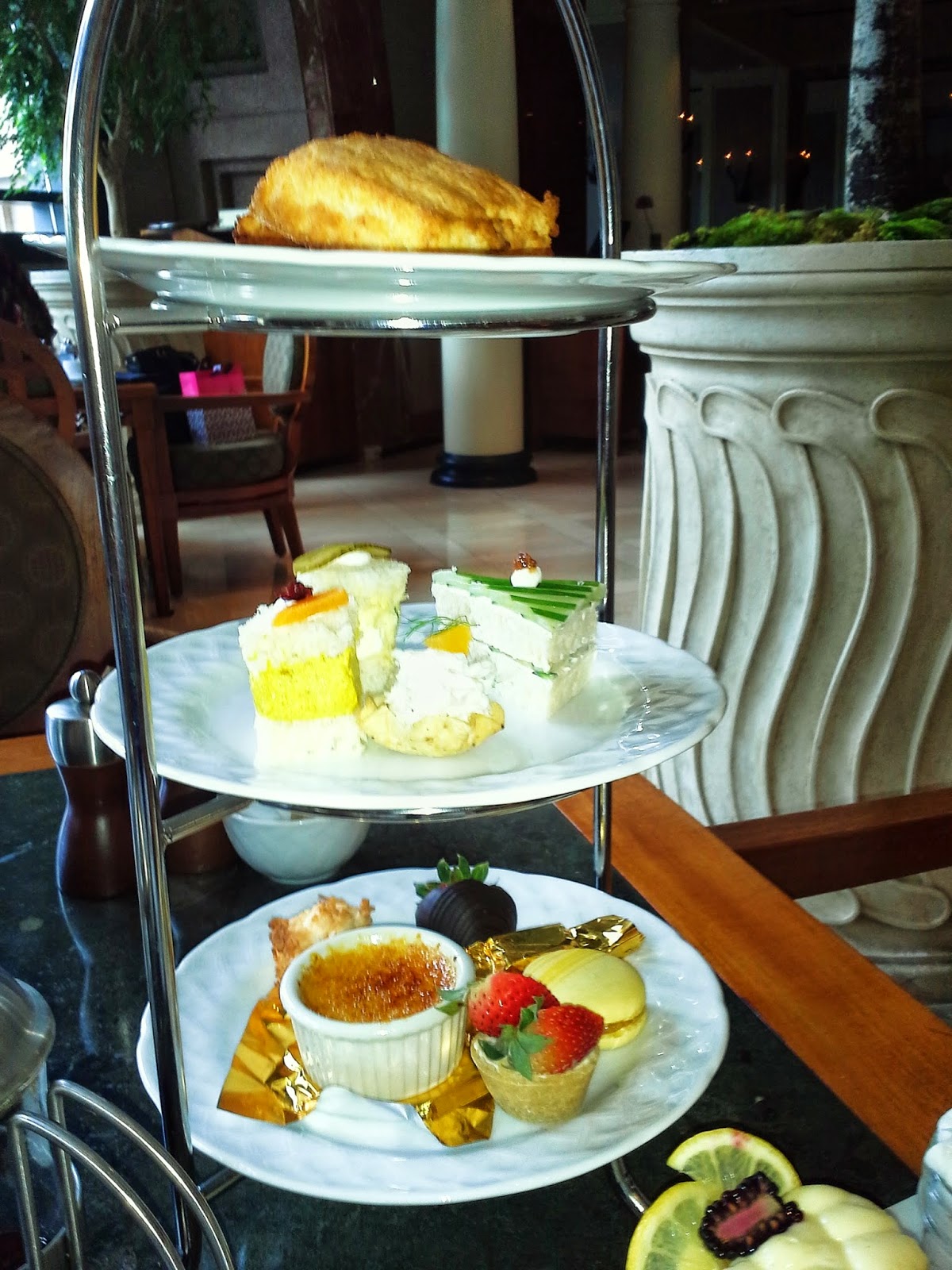 While it already feels like summer in the ATL, it is in fact, still spring.... One of my favorite spring rituals is enjoying Afternoon Tea.  Park 75 at Atlanta's Four Seasons hotel has been offering gluten-free tea service since I inquired about such an option back in 2007.  Back then they didn't have very good bread (since there were few options available) and they didn't make the gluten-free scones in house.

These days, Chef Robert's team really outdoes themselves in terms of the gluten-free tea menu - it's full of delicious food presented as elegantly as anything else at the restaurant.

My recent visit with a glutenoid friend was as amazing as ever.  The scrumptious scones were served with fresh lemon curd and Devonshire cream as well as a seasonal treat - fresh peach compote!  Each was wonderful alone on the scones or even all layered together on them.

The tea sandwiches are now made with good gluten-free bread and our selections included curry chicken salad, cucumber goat cheese, egg salad (my favorite!) and crab salad served in a mini tortilla shell.

Lastly, the gluten-free desserts were as amazing as ever!  The creme brulee was buttery smooth and not overly sweet.  The almond flour macaron, chocolate covered strawberry, coconut macaroon and house-made caramel candy were all delectable.  But the topping on the gluten-free treats was a tiny lemon tart with fresh strawberries.  Honestly, the tart crust was so good that I was slightly concerned that is was not gluten-free.  Of course, the staff at Park 75 is extremely well trained on food allergy service so the crust was absolutely gluten-free - and SERIOUSLY delicious!

If you want to be pampered while enjoying an absolutely divine gluten-free experience, be sure to check out Afternoon Tea at Park 75 downtown!

If tea isn't your style, check out the amazing brunch at Park 75. Be sure to note your gluten-free needs when making a reservation for tea service, brunch or any other meal.

As a previous patron of Mellow Mushroom (over 8 years ago), I was super excited when they introduced a gluten-free pizza crust.  It was unfortunate that I didn't care for the crust at all.  I gave it three tries (as I feel is only fair to do when a new item launches at a restaurant) and each time I could not eat the crust.  And so I didn't go back to Mellow Mushroom again until about a month ago.  Someone told me the company changed their gluten-free crust and it was not only edible, but also good.  We gave it a try and agreed.

All Mellow Mushrooms have the new crust and it's made by a very good company, but it's a custom made crust for MM.  I prefer the original crust from the company to the MM developed crust, but for a quick pizza fix on a weeknight, it's a great option.  I can also get Daura gluten-free beer at our location (beer options vary per store).

It's been a long road for Mellow Mushroom and their gluten-free pizza journey and I'm glad they stuck with it, listened to gluten-free consumers and did right by them.  Hopefully gluten-free diners that gave up on finding good gluten-free pizza at this chain will give them another try like we did.  You might end up being pleasantly surprised!

You know you're getting old when you don't get excited about the next new app for this or that.  Technology can be and is often great, of course, but it also seems to be leading many in society into a lifestyle of communicating through devices more than any other way....and that might not be such a good thing.  Only time will tell on that one.

When looking for new places to eat wherever I'm going in the U.S., I've not found any website quite as appealing as findmeglutenfree.com.  Yes, there is an app which I'm sure most users love.  But I love that I can look things up online as well so I can actually read everything which I honestly can't stand to do on my phone.  In most cases, I can't even read that kind of stuff on a phone even with readers and contacts together.

Findmeglutenfree is like any other gluten-free information source so you still have to do your homework.  I haven't been steered wrong by any of my findings (like Tin Roof Kitchen!) on the site to date, and I still have a ton of places to check out.  So much delicious gluten-free food out there and so little time to enjoy it all.  Ah..it's good to live in the ATL these days!

Sprinkles comes to the ATL 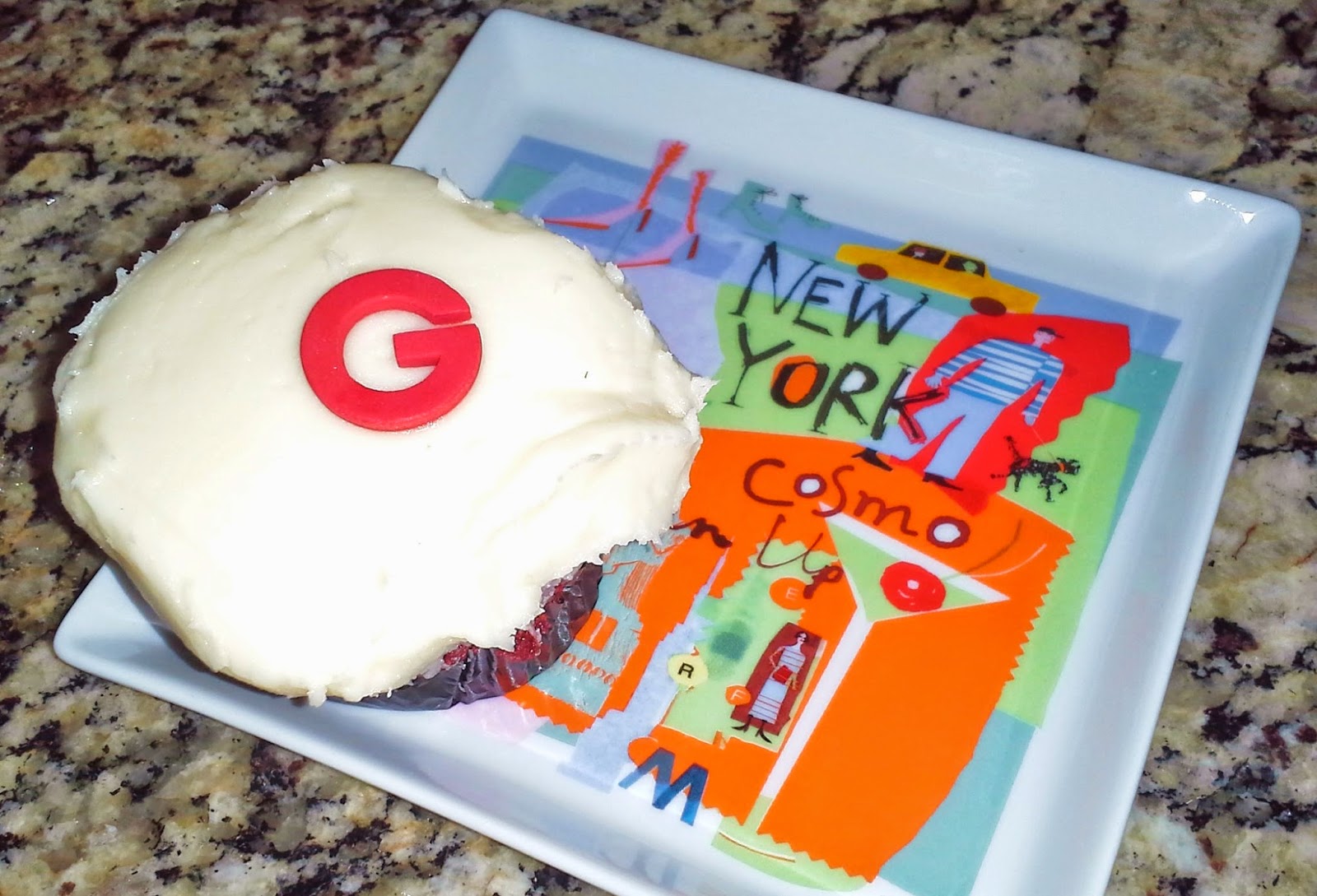 Sprinkles is often credited with starting the cupcake craze in NYC several years ago.  They've opened various locations in the U.S. and finally came down South to Atlanta.  I found out about the store opening through Kelly's blog post.

Since we were heading downtown to the Dogwood Festival a while back, we popped into Sprinkles (located at Lenox Square near the front door) for a treat-to-go on the way home.  The place was buzzing with activity and the staff seemed somewhat overwhelmed (and under-trained).  The only gluten-free flavor they currently offer is the red velvet flavor (also offered in a gluten version).  Since I'm used to choosing from maybe six flavors at Gigi's in Norcross (available six days a week!), it was disappointing to have no choice at all at Sprinkles.

After I placed my order for one cupcake to-go, I overheard the person who rang my ticket up ask what my order meant...the order taker explained it was a gluten-free cupcake.  I paid and then waited for someone to bring the already bagged cupcake to the counter.  I looked inside to see a G on top which indicates the item is gluten-free.  I love the fact that there is not a mountain of frosting on the cupcakes at Sprinkles.  I LOVED the cream cheese frosting on the cupcake - it was seriously amazing!  Unfortunately, the cake part was slightly dry and crumbly (though I've had much worse) and had very little flavor to it.  I would not purchase it again unless someone told me they improved the recipe to be much more moist and flavorful.

It's great that Sprinkles has a gluten-free option and the shop itself is simply darling.  I love the concept of the cupcake ATM and I really wish I could say I loved the gluten-free cupcake, too.  Hopefully, most gluten-free patrons enjoy them as that could lead to the company choosing to offer other gluten-free flavors.

Thankfully, if I'm in the mood for a sweet treat at Lenox in the future, the macaron kiosk just down the mall has amazing options - all of which are gluten-free!

Gourmet gluten-free restaurant in the ATL!

OK - we finally have a 100% gluten-free restaurant in the metro Atlanta area.