When being gluten-free gets old

It's now been well over a decade (11 3/4 years, but who's counting?) since I was diagnosed with celiac.  Of course, it was hard to learn what gluten was, where it was hidden in foods, how to eat out, and most importantly, how to travel while following a strict gluten-free diet.  However, in time it came to be second nature for me, as it does for most of us.  And, with two other family members going off gluten within my first year, I had a pretty easy transition overall.

But there are days when being gluten-free simply isn't fun.  Sometimes it's just annoying and other times it's super stressful.  I'd be hard pressed to believe anyone who didn't experience gluten-free fatigue as I prefer to call it.  I mean, let's get real...there are scores of people with celiac disease (confirmed) who are consuming as much gluten as ever - all the while downing Pepto Bismol (or a similar otc medication) in order to keep their symptoms manageable.  For those of us who take having celiac (which can and absolutely does cause certain cancers) seriously, and would not touch gluten on purpose with a 10-foot pole, it can get weary to remain vigilant 24/7.

There's always a wedding (or worse, a funeral), a family reunion, a work event, a holiday party...well, you get the gist.  There is almost always some event coming up which requires you to do something extra to prepare to attend it.  You need to find out who's supplying the food and what, if anything is safe for you to eat.  If not, can you take your own food in without causing a ruckus with the host or establishment.  Or do you need to sneak any and everything you plan to eat in your purse and possibly your husband's pockets?  Once there, you might need to find a place to quickly nibble on whatever you've smuggled in (yes, it feels like you're smuggling) so that no one takes notice and makes a big deal about it.

I'm convinced that people don't mean to be rude and inappropriate when they inquire about what happens when you consume gluten by mistake.  They are just ignorant....give them a break.  Had I not been the one diagnosed, I might be as ignorant as the next guy.  In years past, I would usually change the subject so as not to make anyone uncomfortable.  But that is probably part of the problem. We don't like talking about things that make others squirm. If we did, MANY more people would understand what celiac disease is by now.  These days, I simply reply that I might throw up for anywhere from an hour to three, depending on how much gluten I've ingested unknowingly.  Sometimes, if I'm feeling generous, I'll add something like "it's like a kid who ate way too much junk at the fair...everything comes up the way it went down"...and I add a little chuckle.

Yes, being gluten-free does gets old from time to time, but I try to look as the positive side of it. At least I'm not out there making myself sick, causing myself serious and possibly irreparable harm, like so many countless others are doing this very minute.  When I remember that, I count my blessings to be sure ;)

When visiting in-laws in the Clearwater, FL area, we needed to find a place for a birthday celebration dinner.  Besides having a safe meal, I wanted to enjoy the food as well....just like any other diner would.  Thankfully, the options my in-laws gave us to look into turned out to be extremely gluten-free friendly!  For reference, I classify "gluten-free friendly" places to be great for foodies looking for a safe gf meal.  Places that might have a gluten-free menu and even understand what gluten-free service entails, but that don't have anything special to offer gf patrons are what I call "gluten-free knowledgeable" places.

So, in checking out the menus for EE Steakout and Mystic Fish (both in the Clearwater, FL area), we decided to have dinner at Mystic Fish. The ambiance was simply charming and while the place was hopping early on Saturday night, we could converse at the table without speaking loudly which is always a plus!

When it came to the menu options, so many dishes naturally gluten-free, or can be prepared as such, that is was hard to make a decision.  I finally settled on fish chowder (yes, gluten-free chowder!) and two small plates for dinner.  Those included artichoke bottoms with crab meat topping, and seared scallops with strawberries and goat cheese over fresh salad greens. Each dish was artfully presented (particularly for this price point restaurant) and better yet - both dishes were seriously delicious! 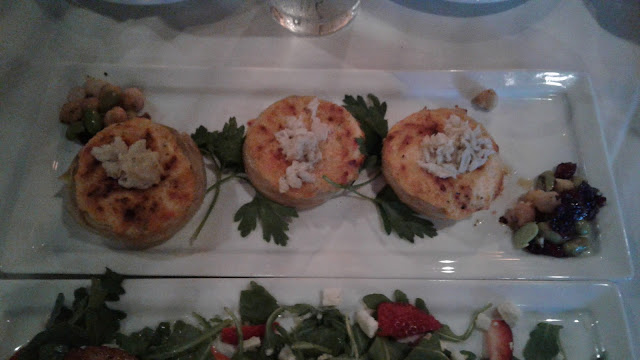 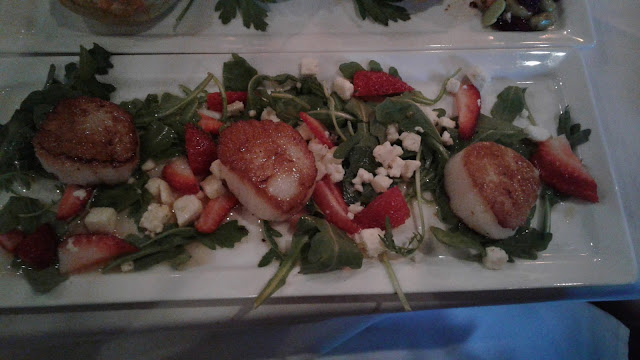 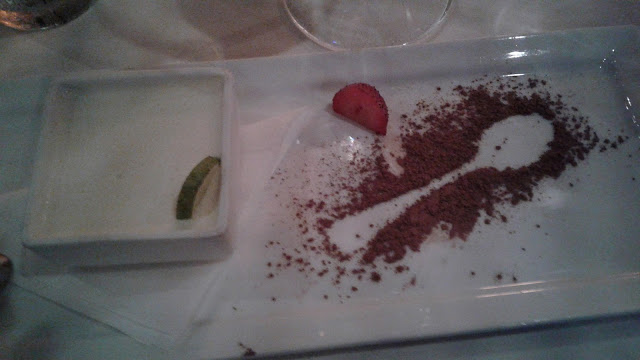 Even though a starter soup and two small plates was plenty for dinner, I had to try one of the many gluten-free desserts, of course!  The desserts are quite small, and priced accordingly so it's common for people to order more than one.  However, the key lime panna cotta was the perfect size to finish off my amazing meal at Mystic Fish!  And the flourless chocolate torte was delish as well...lol!

In addition to the lovely meal we all enjoyed, it so nice to feel well taken care of by the chef, owners and even the educated server. It's wonderful to go to a new place and leave without wishing you lived in Europe where they take food allergies much more seriously than here at home.

Hopefully, we'll get to check out EE Steakout during our next visit to the area!