As most of you know, unless you have a good, gluten free bakery in (or near) your town, you can't buy ready-made gluten free bread that's edible without being heated first. If your local stores carry gluten free bread, they are most likely stored in the freezer case to keep them 'fresh'. We always get a kick (and feel sorrow at the same time) when a newly diagnosed Celiac asks where to buy freshly baked gluten free bread in Atlanta. The answer is from your own oven, of course.

In the past I've made bread from two mixes that deliver wonderful gluten free bread. They also are much easier to prepare if one has a bread machine, which I do not. Since I'm always looking for ways to do everything in the kitchen easier, I recently ordered the new oat bread mix from Tracey's Treats. They have killer pizza crust and muffin mixes so I knew I liked their stuff in general. This new bread mix was supposedly easy to make without a bread machine so I had to try it.

You need a magnifier to read the instructions on the labels from this company if you have over 40 eyes like I do. However, I mixed the bread up quickly and easily and left it to rise for an hour or so. It rose very well and continued to do so when baking. The smell of freshly baked bread is wonderful but smells and even looks can be deceiving when speaking of gluten free bread. The real test would be how it tasted - both toasted and at room temperature. I let the bread cool off slightly before tearing off a piece to test taste. It was just exactly as the name implies - outstanding. Both the taste and texture were phemonenal actually! 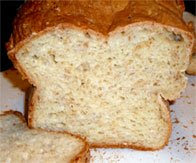 The next day I made an open faced sandwich with the unheated bread that I'd stored on the counter in a baggie overnight. Again, the bread was excellent. Several days later I defrosted some of the same loaf (needs to be stored in freezer if not eating in a couple of days) and had another open faced, unheated sandwich. Still, the bread lived up to it's name - Outstanding Oat Bread. I'm likely the worst gluten free food snob you'll ever find. The only way this bread could be better is if it was sitting on the shelves of my grocery store already baked for me. Maybe one day.....
at August 27, 2008 No comments:

Gluten Free baking - it's really not as hard as it seems

When I was first introduced to the gluten free diet (the week of my Celiac diagnosis) I dove right in and purchased a gluten free cookie mix from Whole Foods. The maker of said mix will remain unamed but it comes in a blue and white box with red accents...and the company makes gluten mixes as well. The smell alone should have been a warning about how bad these cookies would taste but I'm an optomistic person so I remained upbeat as they rose and turned golden brown in the oven. Once they cooled, I took a bite of what looked like a cookie, but tasted and even smelled a little like sawdust with a slight hint of chocolate chip cookie dough flavor. I kid you not - it was that bad. As a matter of fact, it's over two and a half years later and I'm not sure it wasn't the worst gluten free product that's come out of my oven. Oh, and just to prove my point further, please consider this. On an episode of the ABC show 'Cavemen', one of the brothers decided to go on the gluten free diet. They said the word gluten about ten times and our community crashed the ABC server the following day so it took me two days to finally be able to view it. Not suprisingly, that episode is now absent on ABC's site and was pulled from every other site that had publisded it. Anyway, the guy trying the gluten free diet is finally convinced by another brother that the diet is silly. So the newly gluten free brother exclaims 'Good! these cookies taste like dirt!' as he slams the package of cookie mix on the counter...lol!

For a while, I assumed all gluten free baked goods were the same - not worth buying, baking or eating. But that could not be farther from the truth and I'm sort of sorry that there are so many fabulous mixes out there now. I mean who really needs three kinds of favorite brownies anyway? In my gluten eating days I rarely made brownies and now I pretty much make them at least every month if not more often. Or if I'm being lazy, I just buy ready made gluten free brownies, I'm particularly partial to those by French Meadow Bakery. Theirs are teeny tiny so you don't feel guilty if you have one or two of them.

But there's a lot more out there than just brownie mixes. You name it and I can recommend a killer brand for you - scones, muffins, cakes, cookies, pancakes, etc. As with the brownies, there are usually more than a few good choices for mixes. Or if you're lazy like me, there are many fabulous ready made items of the above items...even ready made pancakes that are better than Eggos. Those come from Trader Joe's and are not to be believed!

Here is a tip to use with mixes that I've found work in most any situation. For cake, quick bread and muffin mixes, add unsweetened applesauce. For example, 1/2 cup works for a two layer cake but use only 1/4 cup for a quick bread loaf. This is a trick gluten bakers use and I found out about it on a regular recipe website. I make the best ever pumpkin bread using this trick. I tried four variations of an old family recipe before I finally added the applesauce. Once I did that, everyone thought that it was the best pumpkin bread I'd ever made - including what I baked in my gluten eating days. Now I use this trick for my zuchinni and strawberry quick breads and even blueberry muffins. What else...oh, and I use it in a spice cake mix and a yellow cake mix too. I prefer the natural version from Mott's.

If I'm baking anything that calls for flour, I use Pamela's gluten free pancake and baking mix. I don't use it for pancakes as I prefer the mix from Gluten Free Naturals. Pamela's baking mix subs out cup for cup for regular wheat flour. It even works for savory things like olive cheese puffs and sausage balls. Recently I learned that gluten actually absorbs grease so frying things in a gluten free flour produces a less greasy (and much better tasting) product. Therefore, depending on what you're making, you might adjust the amount of fat (oil, butter or margarine) you use for the recipe. For example, my gluten olive cheese puff recipe calls for three tablespoons of butter but 2 1/2 tablespoons is plenty for the gluten free version.

People are seem perplexed when I tell them my favorite recipe site is Recipe Zaar. This site does not even have a gluten free section on it. You can type gluten free pizza or French bread or whatever....even gluten free funnel cake, and you will find at least a version or two of all of these things. But I just type in what ever I'm looking for, excluding the words gluten free, and sort by ratings before deciding which recipe to print and start experimenting with. If something calls for a cookie crumb crust, I use the gluten free version of whatever type cookie they reference - Oreos, ginger snaps, pecan shortbread, etc. You name a mainstream cookie and I can recommend a gluten free version of it that makes a perfect tasting pie crust. It's not rocket science either. You melt some butter, mix into crushed cookies and press into the pie pan. You follow the recipes instructions for baking details. It should be noted that to date, I have tried three brands of prepared frozen gluten free pie crusts, and have not found any of them to be worth purchasing a second time. If you need a regular pie crust for pies of even quiche, you can not go wrong with the mix from Breads by Anna. I just wished she made a pre-made crust for us...lol!

Why not give gluten free baking a try yourself? I'd love to hear what others are out there creating. Especially if any of you are into uncomplicated creations, like I am. I love cooking more than I ever dreamed possible but there is more to life than being stuck in the kitchen. I strive to create great tasting, quality food that is also fairly easy to make. I recently found a new gluten free bread that is super easy to bake (without a bread machine even) and is shockingly good. But I'll write about that later. Happy baking everyone!
at August 06, 2008 No comments:

These days I consider myself an expert at dining gluten free, even in the US. But in the beginning I could not have gotten through without the cards and dining guide book offered by Triumph Dining. They are doing a give-away through the month of August for their American cuisine dining card. If you don't already have at least that card, I urge you to order your copy today. Below is the press release regarding the promotion. Happy gluten free dining out everyone!

Triumph Dining is giving away FREE American Dining Cards until the end of August. There’s absolutely no purchase necessary. Your readers can simply visit http://www.triumphdining.com/freediningcard.aspx to participate and get a free dining card.

The purpose of this give-away is to raise money for Celiac Disease Awareness. If 15,000 people to sign up for free dining cards, Triumph Dining will make a $10,000 donation in support of a national celiac disease awareness campaign. When we hit our goal, we'll ask you and the gluten free community to help us decide which non-profit(s) receives the donation.

We’re trying to build awareness on two fronts: With 15,000 more dining cards on the street, we’ll be educating more restaurants about the gluten free diet faster. And, with $10,000 funding behind a national campaign, we can diagnose and educate more Celiacs.