Firebirds at Avalon - Check it out! 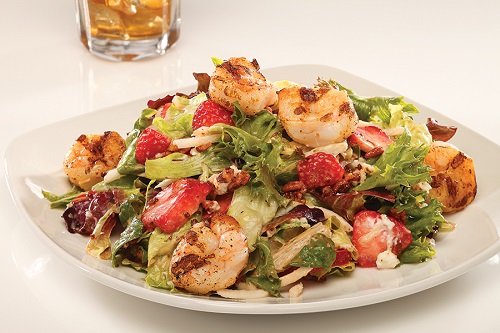 There is a new restaurant in Alpharetta called Firebirds Wood Fired Grill.  It's located just across the street from Avalon, the premiere shopping center in North Fulton.  For those of you that remember Wildfire near Perimeter Mall - Firebirds has similar decor, but it's a somewhat smaller space. It's a large place by most standards - it's just not so big that you feel like a number instead of a customer. It's a lovely resto with tall ceilings, lots of windows and an open kitchen - very nice!

It was 100 degrees out the day we ventured to Firebirds for a very early dinner so we didn't want anything heavy.  We split the amazing grilled shrimp salad which was large enough for four to share in our opinion.  I rarely get excited about salads these days, but this one is my new fave of the summer.  It's seriously incredible - in fact, it was so great, I'd gladly order it sans shrimp!  I had a baked potato and green beans for instead of an entree - only because I wanted the flourless chocolate cake for dessert.  But the salad and potato were so filling that I took the green beans home (they were also delicious!).  My husband loved his barbeque chicken sandwich as well.  Though I didn't notice bread or breaded items on the gluten-free menu, there is plenty enough to enjoy for lunch or dinner.

I've been over creme brulee and gf chocolate cake for half a decade (who wouldn't be if those were the only things offered for dessert for a full decade?), but I decided to try the gf cake here since I saw someone else order it and it looked decadent.  And that's exactly what it was!

I'm excited to go back for lunch when it's a bit cooler so I can try the potato soup on a Tuesday.  There are three gf soups, but each is served on a particular day.  Currently, potato soup day is Tuesday.  I can't remember the last time I was able to order a potato soup in a restaurant.... I've been able to maybe a half dozen times since 2006!

The food and service was excellent at Firebirds!  There is valet parking offered (at certain times) which I think is optional.  Since this is a chain with locations in almost 20 states, I doubt they can vary from the menu, but if they could, having Pure Kneads buns for sandwiches and Trader Joe's gf ginger snaps for the key lime pie crust would be my dream items at Firebirds.  Even with the current gluten-free menu, one can have an excellent gluten-free meal here - complete with a delectable dessert!