Right up front I need to apologize that I can not tell you where I had these TO DIE FOR treats. Sometimes I get little perks for being a leader in the gluten free community in my neck of the woods. And today was one of those times. The husband was confused about why we had to go have a late lunch (or very early dinner) at 2:30 pm. We met gluten free friends and had a fabulous meal together. We had fried everything you can think of....and then we thought we died and went to gluten free Heaven. And in a sense we did.

But I must digress for just a bit. Two years ago when vacationing in New Orleans, I tried to convince the husband to go to the famous Cafe du Monde for a beignet but he wouldn't do it. He knew that I was just being nice but that it would be pretty hard for me to sit and watch him eat a gluteny fried doughy delight drizzled with glaze. I adore his thoughtfulness. No wonder our 20th anniversary is right around the corner. He's a 'keeper' as they say...lol! I remember that day in NoLa, thinking that I'd never have a beignet again - ever. I just could not conceive that someone would one day make gluten free beignets....my mind could not go there.

So today, almost exactly two years later, I had gluten free beignets...some with powdered sugar and some with a glaze that would make a grown gluten free man cry. I had to stop myself from tearing up...it's weird to feel that way over food. For three years I've searched for something...anything that resembled a gluten free Krispy Kreme. Today my search ended. This amazing fried, hot, fluffy, glazed concoction was better than any Krispy Kreme ever dreamed of being. 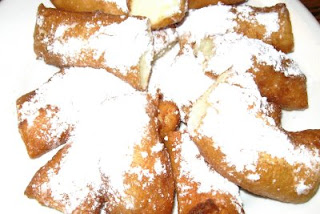 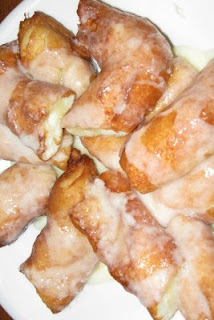 It took me three years but I finally want for nothing in terms of fabulous gluten free food. I searched, I tasted, I conquered. Yes, I still order some food online and I hope one day that isn't necessary. We live in the greatest nation on Earth. Surely we can get this gluten free thing down as good as all the other countries that are way ahead of us already.

I'm so glad I didn't move to Europe when the husband offered to transfer there so my gluten free life would be easier to navigate. Instead of running away from a challenge, I became part of the change I wanted to see in the world. I challenge you all to do the same. You won't believe how good it feels to be part of that change and you'll never know how many you'll help that come after you. And to the person who created the first ever gluten free beignets - well, there really aren't words to thank you enough for all you do. And I really do think you should be on the Food Network!
at March 21, 2009 5 comments: 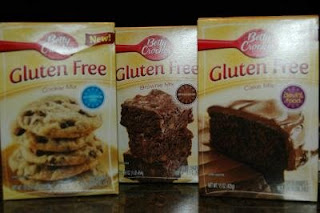 General Mills owns this company....they also own Pillsbury so maybe pop and bake cinnamon buns are not far behind.....

The official word from the company is that they can't talk about the release date yet...or confirm the existence of the product for that matter....lol! But my trustworthy contacts say it's another June release, just like the new gluten free Chex Cereals. There is a chocolate cake mix, chocolate chip cookie mix and brownie mix...so far.

General Mills - WE LOVE YOU!

The news about four new Chex cereals being reformulated to be gluten free is spreading like wildfire from coast to coast, but the actual company customer service reps have only heard about this from consumers calling in to ask about it. I spoke with one such employee today.
It will likely be another month before they will verify the information is true. Since this exact same situation happened with the new gf Rice Chex, it looks like General Mills didn't learn their lesson from that fiasco.

I'm very excited that we (gf consumers) bought enough gf Rice Chex to prove how large our market really is, and that General Mills is rising to the challange of making us more safe cereals. However, why they go to so much trouble to do it and can't bother to inform their own customer service employees about it is beyond me. I think it's pretty simple. Send out a mass e-mail explaining the new products and whatever you want the consumers to know about it. It's ridiculous that a company can not do something that simple.

Still, I'll be looking for the Corn Chex and Honey Nut Chex in June. The day I found the Rice Chex in Target (after looking for two months at every store I could think of) I danced in the asile and thought the husband was right behind me. I was singing 'I found gluten free Rice Chex' and really dancing around and then I turned and the husband was around the corner at an end cap. The other shoppers around me scurried away....they were surely scared I was absolutely deranged...lol! I hope I get to look deranged in the grocery aisle again very soon!

http://www.glutenfreehomemaker.com/2009/03/gluten-free-chex-cereals-available-june.html
at March 18, 2009 No comments:

In January we attended our annual trade show in Orlando, FL. After the special gluten free meal we had in Panama City Beach in November, I decided to visit the Margaritaville location in Orlando, while at Universal Studios for a trade show party one night. It was a long trek to the restaurant from the part of the park our organization had rented for the function. But since 98% of the food offered at the 'free' party was off limits to me, we really had no choice but to make the (park employee escorted) hike over there, and hope it was worth the effort.

After a walk that felt like we'd left the county, we finally arrived at Margaritaville to find it larger and even more elaborately 'theme decorated' than the one in PCB. The exploding volcano was really entertaining, supposedly erupting with what else - a Margarita. The Chef knew we were coming and we were seated right away even though they were on a waiting list and we were quite early for our reservation. It's always good to have a connection to someone in power in a restaurant, whether you're gluten free or not.

At this location they already have a gluten free menu which includes a gluten free bun, french fries (dedicated fryer) and even a gluten free brownie dessert! But of course I wanted something special and had mentioned to the Corporate Chef in an e-mail that I really missed being able to have seafood or crab bisque when dining out. It's super easy to make gluten free but of course, most places don't bother. When the Chef came out he mentioned they'd made me some special seafood bisque. OK - planning ahead once again pays off big time...and being a blogger doesn't hurt either! 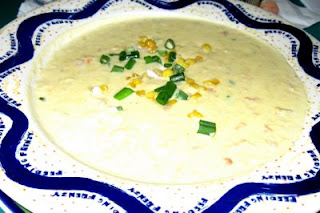 Both the husband and I ordered a bowl - not a cup - of the bisque. Out comes the server with two massive bowls and we realized we had grossly over ordered. The bisque alone was a meal for me and I still had a burger and fries coming.

The taste, texture and smell of this bisque was completely amazing and I don't care what they say about how difficult this dish is to make. They need to put it on the menu and serve to gluten free patrons and glutenoids alike - period. It was chock full of all things seafood and corn and spices and it was simply wonderful! I asked for a container to take some home and had to use a soda cup with plastic lid. I didn't care. I'd have to risk that it would make it to the hotel safely where I had a fridge with freezer.

I honestly can not remember what my husband ordered but it was good and from the gluten free menu. My burger itself was one of the best I've had and though I was thinking I would not like the bun they served, it was actually quite good. I was a little worried I got a gluten bun by mistake, but I noticed the shape is a little odd and knew it was indeed gluten free. We so enjoyed our visit to Margaritaville and the food was outstanding - chain restaurant or not. The 'balloon' girl that entertained patrons was told to treat us to balloon hats and wondered how we knew the Chef. The husband wanted to wear the (connected) hats throughout the meal, but since he's much taller then me (even when seated) that was not feasible. We wore them for a photo and then took them off. The balloon hat, like the bisque, made it home to Atlanta safely and though the air eventually left the heart shaped hat, the bisque was excellent for lunch the next week!
Thanks to Margaritaville Orlando for going the extra mile to make their customers happy - even those who can't eat gluten. I think since they have a dedicated fryer already, gluten free chicken fingers can't be far behind.... Remember to ask for what you want in life - even if it's just seafood bisque - you never know when you're going to get it just for the asking. 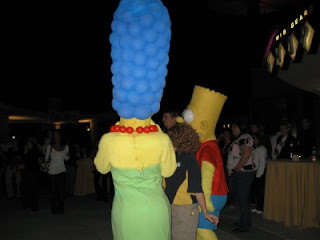 After dinner - and the long trek to our trade show party - we joined in the street dancing with the Simpson characters. It was certainly a sight to see these large yellow creatures bobbing around with everyone!
at March 03, 2009 No comments: