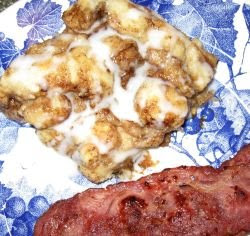 When I could eat gluten I didn't eat Cinnamon buns on a regular basis. But when you can't have something, you want it even more than you did when you could have it. So, I set out over three years ago to find a decent gluten free Cinnamon bun. I didn't set a very high standard because in my mind, there was no such thing as a 'Cinnabon' type bun made without gluten.
After many online purchases for different versions of so-so tasting gluten free Cinnamon buns I finally gave up. I was surviving without gluten free Krispy Kremes (doughnuts) so I added Cinnamon buns to the short list of things I could not find a decent - or better yet delicious - gluten free version of.

Luckily my list changed when I read rave reviews (on various blogs) of the Cinnamon Sticky Buns from Everybody Eats in NYC. The price for their product was steep so I thought long and hard before placing an order for them. Since I'd read a rave review on Catherine's blog about their French Baguettes, I ordered those and the Deli Rolls, in addition to the buns.

Upon request, someone from Everybody Eats e-mailed me detailed instructions about how to store, thaw and heat the buns for the best possible taste. As the buns were warming in the oven, the smell wafting through the kitchen reminded me of walking past T.J. Cinnamons in the mall. But smells can be deceiving - especially with gluten free baked goods - so the ultimate test would be the taste test.

Finally after about twenty minutes in the oven, the Cinnamon Sticky Buns were ready. They seemed very dense in the package but after heating they were light and fluffy, yet still substantial feeling. It was strange actually, that such a transformation took place, but gluten free baking is a science that I really don't understand (and probably never will).

I'll doubt I'll ever forget tasting the incredibly decadent, gooey buns for the first
time. It was truly gluten free nirvana. I was just looking for a decent Cinnamon bun made without gluten. It never occurred to me that I'd find the best tasting version I'd ever eaten, including those made with gluten. My husband actually said 'are you sure these are gluten free?' with a very concerned look on his face. I explained that Everybody Eats is a dedicated 100% gluten free bakery and they did not mess up and send us products made with gluten.

It's embarrassing to admit but when people who can't eat gluten first taste something that is at good or (better) than the gluten version of the food they used to enjoy, they generally tear up. I can't explain why this happens. It just happens to women and men alike - and it certainly happened when I first bit into the Cinnamon Sticky Buns from Everybody Eats. It still happens actually, because we rarely have them. Due to the calories, fat content and price, we use them mostly for special occasions. The memory of them alone sustains me until the next time we can think of something to celebrate.

After months of nagging every health food store in town to bring in the Everybody Eats line (so I could avoid paying shipping charges to enjoy them) finally Return to Eden saved the day. They now stock the Everybody Eats French Baguettes, Deli Rolls and my favorite gluten free treat in life - Cinnamon Sticky Buns. The Deli Rolls and Baguette prices were just reduced but even before that happened, we thought the products were worth every penny - and then some.

My husband routinely asks if we can take the Everybody Eats breakfast treat on visits to see his family. He says the buns are good enough to share with the glutenoids we're staying with. I agree but the family can eat $1.99 'pop and bake' gluten buns, which by the way don't hold a candle to the Everybody Eats version. Obviously the answer to my husband is, and will always be, NO!

*To heat 'Cinnamon Sticky Buns', remove plastic bag and wrap the bun tray entirely (top and bottom) tightly in foil. Heat in 400 degree oven, until very hot and soft. These buns are not overly sweet so I make a glaze consisting of milk, powdered sugar and a touch of vanilla to pour over them (after removing them from the oven). Enjoy!

More info: If you live in the NYC area, you can also enjoy handmade gluten free Ravioli from Everybody Eats. It's better than gluten versions we had in Italy. The French Baguettes, Deli Rolls and Egg Challah are exceptional as well. I'm not really a cookie person but the Everybody Eats Chocolate Chip Cookies are my husband's favorite gluten free cookie.
at June 04, 2009 No comments: