I was thrilled to find out some of my family moved to the beach and we’d be spending Thanksgiving down there this year. However, I had no idea how backwards PCB was when it came to food intolerances. After finding nothing helpful online about dining gluten free there, I remembered Dr. Rudert talking about how some patients from the panhandle drive all the way to Atlanta to see her regarding Celiac. The others apparently go to Shands in Gainesville or Mayo in Jacksonville. As far as I can tell the only doctors that know anything about Celiac in that part of FL are in Pensacola and we were not driving over there for dinner, of course. The usual suspects are there…Outback, Bonefish and Carabba’s but I’m not driving to FL to eat at a place I have around the corner from my house - unless I have no other safe options.

Finally, I found out that there is a Margaritaville in PCB and the Orlando location has a gluten free menu. They even have a dedicated fryer so their fries are safe to eat. The head Chef in Orlando (Daniel) said he’d have the new Chef (Pietro) at PCB take care of our party of ten for the Wed. night before Thanksgiving. Chef Pietro called me to discuss my preferences for dinner and offered to make us gluten free crab cakes. There are three Celiacs in my family (that we’re aware of) so this was quite a treat for us. I did have to drop off gluten free Ener-G crackers ahead of time but I had some that were on clearance and they’d expired the week before – perfect for breadcrumbs. 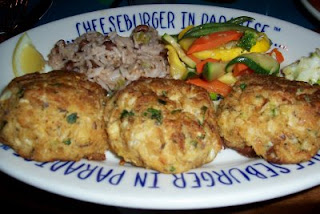 Before we ordered at Margaritaville, the Chef came out to see if we had any questions and let us know he’d brought in gluten free buns and brownies for us too. But we were set on crab cakes and I don’t like the buns they use anyway – I’m spoiled being able to have the Whole Foods bun at the Roswell Outback.

All the gluten free diners in our party ordered the crab cakes and my husband who is 99% gluten free ordered some Mahi Mahi dish (which was also gluten free). We could have the rice and veggies there but not the roasted potatoes, which contained gluten. I guess because I took so many crackers in the Chef made us three crab cakes which were large so I could only eat half of them. They were very good and didn’t have any odd taste or texture to them. They were actually pretty similar to what I make at home except I put spicey brown mustard in mine and I don’t think these contained any mustard. It would have been nice to have a mustard or remolaude sauce with them but the lemon juice was fine. It was just nice having crab cakes that I didn’t have to make. In Atlanta, the Four Seasons Hotel serves the best I’ve had but they are also $45 so the $18.50 cost at Margarittaville was quite the deal indeed! If you’re in the Panama City Beach area and go to Margaritaville, you might ask if they have a gluten free bun or brownie for you since we didn't order them and no one else would know they're available. 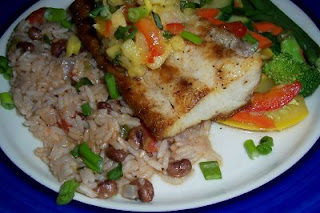 All Margaritaville locations will eventually have a printed gluten free menu and you can find out where they all are by checking their website. I hope they’ll put a gluten free crab bisque on the menu…that’s something I have to make at home these days and it’s so easy to make gluten free. Most restaurants could do it for a few pennies a bowl and serve it to everyone – glutenoids included.

I've got to say we are not really into theme, family oriented restaurants but I was surprised at how much fun this place was. We left shortly after the live music began and I wish we could have stayed a little longer. It's more than a place for a fun bite to eat. It really is an experience..not one I'd want every day but nice to enjoy every so often. The kids in our party loved it too...the smoking plane with descending salt shaker and Jimmy Buffet videos were great. As we say in the South...it was a hoot!
at December 01, 2008 2 comments:

Rosa Mexicano opened in Atlantic Station well over a year ago and somehow I never tried it until September of this year. I’d read a rave review of the Manhattan location but thought I was reading a review for the Atlanta location as it was on Catherine’s blog. I thought she’d tried the Atlanta restaurant when visiting as she often did when at her previous job. After seeing the pictures of the food she had in NYC, I had to try and eat at the location here - if possible to do so safely gluten free. The menus vary slightly at each location but most of the menu items in Atlanta are naturally gluten free. I found this out by speaking with a company executive in NYC.

Our first visit to Rosa Mexicano was for brunch. It was good, but basic breakfast food with a Mexican twist. I had an egg and cheese scramble served in an iron skillet with rice and beans (they are both gluten free). We also had chips with red and green salsa and the red sauce was phenomenal. We have some good glutenoid friends that are always willing to try new places with us and they enjoyed their meals as well. 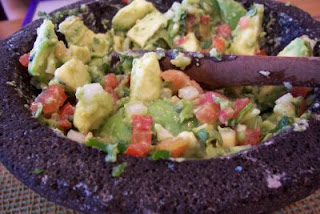 My next meal at Rosa Mexicano was for lunch. I met a gluten free friend there and we had the tableside guacamole service to start. It was surprisingly fast and very good. Still, the red sauce was my favorite for the chips. I could eat it by the gallon. For my meal I tried Suizas (two soft corn tortillas filled with pulled roasted chicken, topped with a creamy tomatillo sauce and queso fresco), which the server recommended and it was really good. I took half of it home for later. My friend ordered something similar to chicken fajitas and also enjoyed her dish. 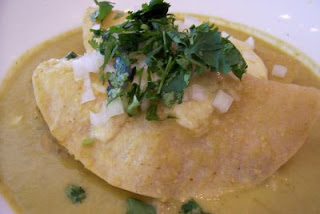 Right when we thought our meal was over the server brought out desserts which the manager had ordered for us. The Chef made us Mexican Sundaes complete with both vanilla and chocolate ice cream and Mexican caramel sauce which included toasted coconut. It was amazing and I don’t even really like ice cream desserts. 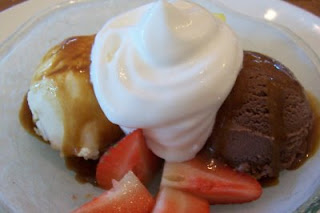 When in Atlanta, or anywhere they have a Rosa Mexicano location, you should treat yourself to a gourmet Mexican meal, whether you’re gluten free or not. They are a customer service oriented restaurant which you’d assume all restaurants are but....at least here, that is not the case. Many places are all style without much substance to back it up. Rosa Mexicano is the real deal!

On Sunday morning we checked out of the Adolphus Hotel and headed to the Kozy Kitchen for breakfast. I’d read about the place on Yelp.com and it was listed as a safe place on the Dallas Celiac support group website. The restaurant was in a tiny strip mall a few miles from downtown Dallas and if you were not looking for it, you'd never find it. We walked in to find a few tables seated and some interesting looking employees. Our server had a Mohawk haircut with an interesting color. He seemed annoyed that I questioned him about the gluten free French toast, as if every restaurant served such a dish. When the toast arrived my husband tasted it and said there was no way it was gluten free but when the table next to us got their’s (they’d also ordered the gluten free version) we knew ours must be safe for me to eat. It was without question the best gl 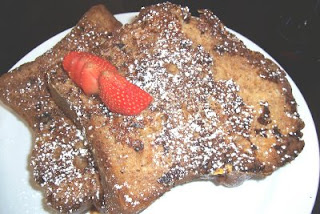 uten free French toast I’ve had and the only version I’ve had in a restaurant. 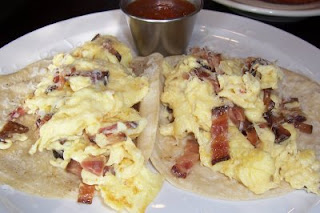 For my main course (yes, I had courses for breakfast) I had breakfast tacos which were made with corn tortillas. All the food we had was outstanding and gluten free. They do serve gluten there so you need to ask questions if you go - there is no gluten free menu but the gluten free items are pretty clearly marked. I have no idea what flours they use in the bread here but it’s a dark grain as the color is almost a chocolate brown. Whatever it was it was some of the best gluten free bread I’ve had. It was light and fluffy….and well, it was unlike most gluten free bread you can buy in the freezer section of the grocery store.


We knew that carrot cake was a signature dessert at the Kozy Kitchen so we got a piece to go. We ate it at the airport before boarding the plane and while it was fine, there was nothing special about it. There was nothing about it either that would indicate it was gluten free. It was just a basic piece of carrot cake which any glutenoid would have been happy to eat.

All in all our vist to the Lone Star state was fun and especially tasty and we’d go back in a heartbeat. Places not to miss if you’re ever there are the Little Aussie Bakery in San Antonio, Laura’s Bistro in Plano and the Kozy Kitchen in Dallas. You know those Texans do things big and they really do gluten free big there. We’re still waiting for a 100% gluten free restaurant in Atlanta and I think we’ll be waiting for a long while.
at December 01, 2008 No comments: