Anyone who loved bread when they could have gluten might still be looking for that perfect, normal tasting, I-can't-believe-it's-gluten-free-bread...and hoping the next brand they try will be it.  Over the years, I'd pretty much given up ever finding the all-elusive perfect gluten-free bread.  Carbs are really not my friend these days so I didn't feel I was missing anything.  Recently, with the discovery of Jersey Mike's amazing sandwiches and my favorite freshly baked scones from Seven Sisters, I've enjoyed bread items more than in recent years.  However, I still find myself letting sliced bread sit in the fridge too long....until it's almost petrified and has to be thrown out.  Throwing out food of any kind is terrible and I try very hard not to ever do it.  So, I rarely buy bread, but do splurge on bagels every now and then.  Those freeze well and can be taken out the night before you need one and for me, that means much less waste than sliced bread.

For my birthday last year, we went to Scotland for the first time.  To say the trip was amazing is an extreme understatement.  We went in the warm season - July - making sure to pack like it was winter in the ATL.  Yes, we needed gloves, hats, coats, scarves and of course - heavy duty umbrellas! More about the trip later.  The point of this post, which is dragging on unnecessarily, is to share the best gluten-free find I've had - EVER!

Rumors about Genius bread surfaced many years ago, but it was the brand of the bread sold in many parts of Europe.  What I didn't realize at the time, is when it was introduced in the US, it was not (in any way shape or form) the bread that everyone who'd had it in Europe had raved about. In fact, I could not believe anyone would think the bread was any different than your standard, oddly textured, frozen bread we've all become accustomed to.  Eventually, I found out all Genius bread is not created equal - to say the least!

Fast forward several years when I walked into a Sainsbury's in Edinburgh and found Genius bread sitting on the shelf - NOT in the freezer, mind you - in the 'free from' section.  Strangely enough, because the bread was as light as a feather AND it was a huge loaf, I immediately assumed that it was regular, gluten containing bread. Seriously - that went though my mind even though the bread was in the 'free from' section.  That's where allergen-free products are found in many countries in Europe.  They don't mix everything up like so many stores here do.

OK - so there is a light loaf of bread that is labelled gluten-free. The size of the slices is "normal" making it all the more confusing.  It's hard to wrap your brain around something you didn't know could, or did, exist.  It was...well, it was a gluten-free miracle of sorts.  We picked up some basics like eggs, cereal, fruit, cheese, wine, milk and various 'free from' snacks like mini tarts (yum!) and made our way back to our fantastic Home Away apartment.  Our plane had arrived just a few hours before so it was time for lunch.  Naturally, I decided to have a piece of bread with butter on it along with a grilled chicken salad.

It was love at fist bite for the REAL Genius bread.  Even still - I literally ran into the kitchen to read the label on the bread bag again!  At this point, you feel as though you're losing your grip on reality.  How many times do I have to read a label to believe the bread, as inconceivably delcious as it is, is in fact, GLUTEN-FREE?  Enough already - get over it and enjoy it!  And that is what I did for the entire trip, even savoring the last slice at the Edinburgh airport, before heading home.  It wasn't until after I got back to reality - the one where no amazing gluten-free bread is on the shelf at my local grocery store - that I began to question why that was.  More on that another day.

For now, please know that if you are anywhere outside the U.S. that sells Genius bread - BUY IT!!!  You won't like it - you'll love it and then you'll be dissappointed that you can't find it anywhere in this country.  The only upside is that if this bread was at the store around the corner, I would have a very hard time sticking to my self-imposed low carb diet...lol!

At the time of this post, the original Genius gluten-free products are NOT sold in the U.S.  Maybe if we all request they sell the REAL Genius bread in the U.S. - by contacting the company, we'll get it here eventually ;)

What happened to Burger 21?

However, over the last six months or so, our orders often haven't been made right.  Thankfully, my meal was still gluten-free, but the bacon we paid for was not on the burger.  This happened three consecutive times.  Finally, we complained (via phone) and the next time my husband went in, they gave him a free burger on our take-out order.  Unfortunately, even though my burger had the bacon ordered on it, it also had lots of condiments and other stuff I do not eat on burgers.  It was completely gross so we had to go back and exchange it for another burger.  We got more coupons for that mistake, but by then I was thinking I don't really care about saving on an order if the restaurant can't seem to prepare it correctly...over and over again.

Finally, another take-out order and again, it was prepared incorrectly.  But this time my husband knew to check the order BEFORE he left and sure enough, there was stuff on my burger which was not supposed to be on it...and the order taker definitely confirmed the other back correctly before sending details to the kitchen.  So, now we assume someone in the kitchen can't read the tickets....or they're snap chatting with someone or taking selfies...whatever kids do these days...lol!  Whatever the issue, they're absolutely not concentrating on getting orders prepared correctly.

Now my husband won't go back and since he's the official take-out guy at our house, I'm kind of out of luck.  By the way, Burger 21 burgers are fine and the fries are very tasty.  But the gluten-free buns and burgers at Cheeseburger Bobby's are better.  I can't have fries there due to no dedicated fryer..hence our past tendency to get burgers from Burger 21, unless I'm not in the mood for fries.

AUGUST 2019:  Just wanted to update how this location of Burger 21 is doing.  They have now been preparing our orders correctly about 75% of the time.  My husband's order has been wrong for the most part, but he can eat anything so he just deals with it.  We've almost stopped going there completely, as I'll make baked fries at home to go with Cheeseburger Bobby's burgers - they have the better burger and gf bun anyway!

I didn't grow up eating Twinkies (thank goodness), but I know many people love them and for those that get diagnosed with celiac or a wheat allergy, it's bye-bye to this nostalgic ooey gooey treat.  Since I've had so few twinkies, I could not tell a real one from an imposter even if I could eat one.

Even though I don't care anything about having a Twinkie type treat, I coudn't resist the version offered by Katz Gluten-Free.  There was a vanilla creme filled cake and a chocolate creme filled cake from this line in the freezer at Sprouts.  They were on sale so I could not pass the oportunity to try at least one version up. 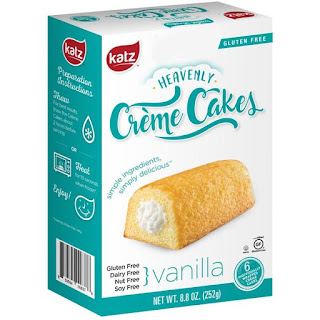 The first thing I noticed was how small the little cakes were...I think they're smaller than Twinkies, but I could be wrong about that.  Then you have to let it defrost on the counter before eating it.  So right off the bat, this is a miss for me.  I don't want to have to think two hours ahead of time "I think I'll have a gf Twinkie like treat today".

Eventually, the cake was ready to try.  I'm a huge fan of Katz so it was a bit surprising that this cake didn't taste very good to me.  The cake and the creme filling (of which there was very little of) were a total miss for me.  Even my husband who enjoys pretty much anything baked, including things I think are super horrid, didn't care for it.


We'll stick to the amazing apple fritters and small apple pie (not the mini pies) from Katz from now on ;)