Once again Atlanta has proved itself as THE place to dine out gluten free - at least in the SE. Even Miami can not hold a candle to our fabulous gluten free dining options. Crab cakes are one of the restaurant delights that I've missed most since my Celiac diagnosis. I was born and raised in the Florida panhandle and I love most things seafood...raw oysters being the only exception I can think of. The first place that offered to make me gluten free crab cakes was a place in Orlando called Samba Room. When the Chef offered to make them for me, I almost fell off my chair. He acted as if it was no big deal to do this for me, but I've been hard pressed to find such a Chef in Atlanta since then. My next experience was at Park 75, the Atlanta Four Seasons Hotel restaurant down town. But crab cakes were only offered for their official Gluten Free Week, back in April. That meant I got to enjoy them only once. Of course they were absolutely fantastic, as all of Chef Robert's gluten free creations are!

Fast forward to a few months ago when the corporate Chef from Meehan's Public House contacted Kerry (the organizer of our dinner club) about their brand new gluten free menu. A menu that included gluten free crab cakes.... maybe there is something to this law of attraction thing after all. Last night we took the dinner club to Meehan's with our July event. They offered their regular gluten free menu, and many other things that are not usually available to us. But at least last night our group of 35 dined like gluten free royalty! 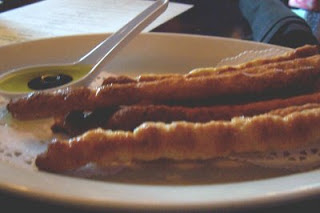 Meehan's is more of a pub atmosphere so it was very loud and boisterous inside. Some of the 'regular' patrons there asked one of our members if we were doing a speed dating event. We all got quite a kick out of that, to say the least! After we'd ordered our food, a plate of bread sticks suddenly appeared on the table. Both Kerry and I got a little concerned...someone didn't get the memo. 'We can't eat bread, but thanks anyway'. Then the server explained that these were gluten free bread sticks prepared just for us. What a wonderful surprise! Everyone found it hard to believe these flavorful and perfectly baked bread sticks were gluten free, including me. And they were better than some others that are quite famous and served in NYC at a pizza joint we all love. Yes, they were that great! The dipping sauce was some olive oil with a dollop of balsamic vinegar dropped in. As great as they were, I restrained myself and only ate two of them but I could have downed the entire plate without batting an eye.

For an appetizer I chose the fried green tomato 'stack' with herb infused goat cheese and spicy pepper jelly....the breading was a little heavy for me but that's a good criticism for someone with Celiac to have. The flavors and texture of this dish came together in a taste explosion which I quite enjoyed. For my entree I had the Pan Seared Crab Cakes - of course. It was actually listed as an appetizer but the portion of two was the perfect sized entree for me. My husband had the Steak Au Poivre as his main course, which I didn't taste even though I could have...gluten free gravy over the steak and mashed potatoes and everything. He liked it very much but the winner of the night was the crab cakes, hands down. They were crispy on the top and bottom, full of flavor and made mostly of crab meat. The grain mustard sauce and Granny Smith Apple Horseradish slaw on the plate finished the dish off perfectly. I could not eat both of my cakes and have dessert so I took one home and had it for lunch the next day. Other members in our group also enjoyed the Sheppard's Pie, Grilled Ahi Tuna and Chicken Pad Thai. 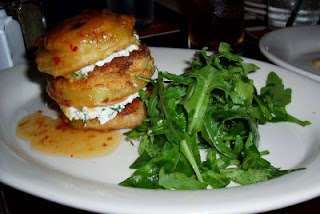 Dessert choices included a White Chocolate Panna Cotta with Bing Cherries or a Chocolate Pate with fresh cream and raspberries. I'd never even heard of chocoate pate before so my choice was obvious. And no, this dish didn't have any liver in it, in case like me, you were wondering about that. I don't think I can adequately describe how fabulous this dessert was, except to say it's like something you'd expect to be served in a fine Parisian restaurant. It was very rich so I brought about half of that home too, and indulged myself for several days. Since this dessert contains bittersweet chocolate, my husband could not share it with me. Oh well, I guess we all have our sacrifices to make, don't we? 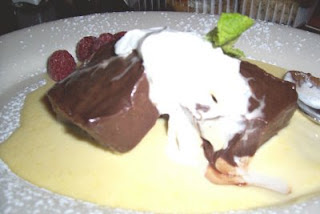 If anyone had told me two years ago that gluten free crab cakes would be on any menu in Atlanta GA, I would have questioned their sanity. But today we can walk into Meehan's any of day of the week and order this very sought after gluten free dish. We can't get the bread sticks on demand...at least as of right now. But who knows what the future holds for us at Meehan's. If my instincts are correct, it is certainly something very tasty. Thanks to Chef Linda and the gang at Meehan's for making this event so special for our group. Hopefully your efforts will be rewarded in kind.
at July 11, 2008