OK - if you're someone who isn't able, or interested, in eating something made from gluten-free wheat starch (yes, it's a real thing), then you might want to skip this review.  For reference, Micky D's still lists hydrolyzed wheat as an ingredient (in fryer oil) and I don't know anyone personally that has celiac and can't eat their fries or hash browns.

First a little background....back in 2006, fresh off my celiac dx, we went to London and Paris.  It was one of the most amazing vacations we've taken, even though I had to pass up the amazing treats in Paris patisseries.  In London, at Sainsbury's, I bought all kinds of shelf-stable mini loaves and muffins to supplement my breakfasts in both countries.  I found out much later that the items were made with highly processed gluten-free wheat starch, as was common in Europe at the time.  They were also not made to the US standard of 20ppm, but a much more generous 200ppm.  The EU has changed it's definition to match that of the US, so don't worry if you're traveling there present day.  In any case, the shelf stable goodies were amazing and certainly didn't make me sick.  I likely have a higher threshold than some regarding the amount of gluten that makes me sick.  Sorry - if you think everyone can and will get sick from anything over 20ppm - that's also incorrect.  I cleared this up when interviewing an internationally renowned celiac expert.  As they explained it to me in layman's terms, you have to choose the lowest common denominator when it comes to a gluten-free label standard.  That means some people can't safely take in more than 20ppm of gluten, while others might be able to handle more.  As with all Schar products, they pass the 20ppm standard in every country they're sold in.

So, back to the Schar croissants.  After looking for this item for more than three years, I finally gave up.  I knew the company would run into issues in the US, considering the ingredient label clearly states wheat starch (first ingredient, in fact).  You can't make people understand science and no one should eat anything they don't want to regardless of what science proves.  I assumed the item was no longer sold in the US and didn't think about it again...until I saw the bag of Schar croissants at Earthfare!  Needless to say, I threw the bag in the cart and went on my overly-merry way!

Three days later, I thawed one lone croissant (on the counter) for just over and hour, and baked it for 8 minutes as directed.  It was golden brown...it was pretty flaky...and it was DELICIOUS! I slathered it with butter and savored every amazing bite.  Now, it's not like a fresh baked croissant from Whole Foods, but it's probably as good as anything you'd find frozen - even with gluten in it!  Yes - it's really that tasty, people. 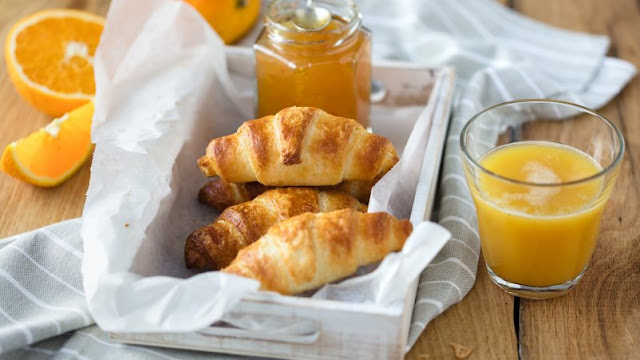