The only "real" tasting gluten-free Cheez-It type cracker I've had in a dozen years was from a bakery in Washington state.  And that company no longer makes what I considered their best item.  Over the years, I've tried most every cheesy crackers I've run across, and while I love Marilyn's Gourmet cheese sticks, I haven't found a Cheez-It replacement worth buying twice.  I was pretty excited by the Lance option, but those ended up having an odd smell to me.  The smell makes them inedible a day or so after the bag is opened.

When I spotted the Three Bakers "Snackers" at Earthfare recently, I knew I had to try them. And, they weren't even that expensive for a gf cracker!  Up front, I should note that I don't really care for air filled snacks, which is what the Snackers are.  They are puffed up and empty inside.  That's clear from the image on the bag, but I had to try them while available.  You never know when your favorite item will be taken off the market by a store, or discontinued by the manufacturer. So annoying!

So...what do I think about the cheese flavored Snackers from Three Bakers? I actually like them a lot!  Not enough to keep them on hand on the regular - due to aforementioned puffy factor - but the taste and texture is really good! 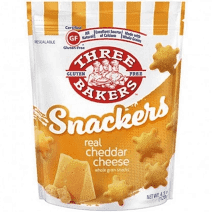 Find out where you can buy these snacks near you on the 'where to buy' page on the Three Bakers website.    There are three other flavors available including chocolate chip, chocolate chocolate chip and honey graham.  Now that I think about it, the latter might be worth using for a pie crust!