During a recent GF Dinner Club outing at Wisteria in Atlanta, we dined on some pretty incredible food and most amazingly, most of it was on the 'regular' menu. I had the Crab Bisque with a goat cheese and calvados creme fraiche to start and others enjoyed the scallops and gourmet salads. As most of you know, it's almost impossible to find a gluten free version of any kind of bisque in a restaurant. And Wisteria's version is probably the best in town, even compared to gluten versions I ate in the past. 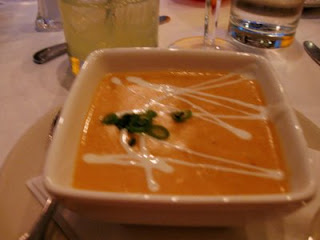 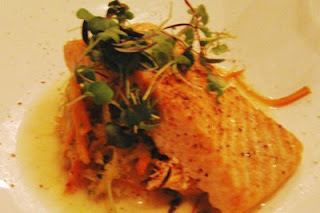 I ordered the Pecan crusted Salmon but in fact, the coating contained gluten so I really just got salmon. But I wanted it for the coating....so easy to do gluten free but I wasn't paying attention to the menu which clearly noted that the salmon would need modification to be made gluten free. I'll pay better attention next time around. 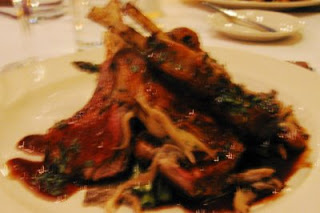 As the gluten free dessert choices there are limited, they were kind enough to bring in a gluten free chocolate ganache torte just for our event. It came from Southern Sweets in Decatur. I passed on it but everyone raved about it so much that I'll likely order it from the bakery for a special occasion when I don't feel like making dessert myself. Southern Sweets has two different chocolate desserts they make without gluten, though this is not indicated anywhere on their website.

Chef/Owner Jason Hill's talent shines through both the food and service at Wisteria - both are fabulous and I recommend a visit regardless if you're gluten free or not. Thanks to my Organizer Lori, who planned this amazing event, and to the staff at Wisteria for truly making us all feel very welcomed!