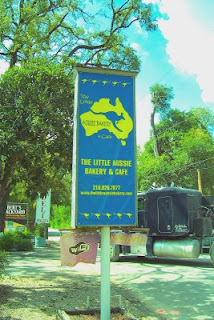 We had to attend a wedding in Dallas so I negotiated a trip to San Antonio before the wedding weekend. Our flight on Wednesday landed at 10 a.m. and after picking up the rental car we headed straight to the Little Aussie Bakery for an early lunch. It is the only 100% gluten free restaurant in San Antonio and it's in a little house, complete with a fireplace and a shower in the rest room...lol! It reminded me of a place that would have been in the Highlands here, before that area became so upscale. Upon entering the place I saw a dessert case, filled with six fancy looking cakes. They looked like cakes you'd find in a gluten bakery in NYC. It was hard to believe they were all gluten free but of course I knew they were. Our server Crystal actually apologized that the desserts didn't look that nice since their pastry chef was on vacation. I can't imagine how they could have looked any better that they did. 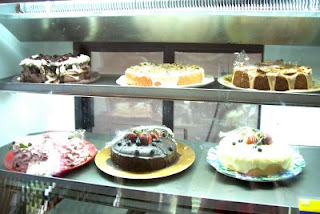 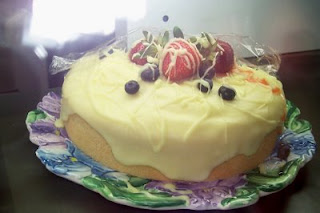 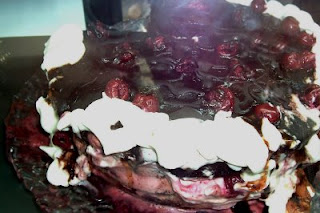 After choosing a table by a window in the back we started reviewing the menu. It is not that extensive but includes varied sandwiches (made with on site baked bread), pizzas, soups, salads, lasagna, garlic bread and even a leg of lamb. To say it was overwhelming to stare at a menu that had nothing off limits to me is quite an understatement. I teared up just like I did at Risotteria in NYC (the first place I'd been able to have pizza out since my diagnosis). It sounds like a silly reaction to people that don't have any dietary restrictions and I'm not someone whose life was ever controlled by food even. But the reality is that in our world every social event, client lunch, company party, wedding, funeral, etc. is a mine field full of something that is poison to us. Most of the time I do fine but sometimes it gets old, especially when people don't get it. And most people don't get it, trust me. So at the LAB (as they refer to themselves) I got to do what most 'normal' people do. Walk into a restaurant, sit down, read the menu and order whatever the heck I wanted. And that felt like winning a million dollars to me! Or maybe better since money truly can not buy happiness. Shortly after we ordered, Crystal brought out some garlic bread. It was soft in the middle with a crunchy crust. It was unlike any gluten free bread I've had and I absolutely could have eaten my own weight in it....lol! Luckily for me (if not my waistline), even more bread was served with my meal. 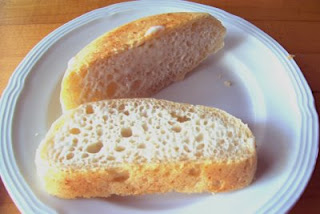 The lasagna of the day was chicken (with bechamel sauce) which I'd already heard was excellent so I had no problem making my choice. My husband finally settled on a pepperoni pizza but I have no idea why since Pizza Fusion is opening here next month. Whatever - it was his lunch but at least I got to taste it. The pizza was very good but did not compare to my lasagna which was excellent. The side salad served with had an interesting sweet citrus dressing. The lasagna was not a large portion so I had plenty of room for dessert. And since we could not decide on anything we wanted to share, we each got our own 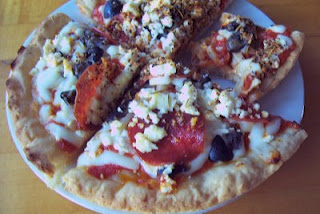 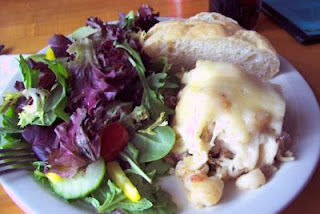 Choosing which of the six desserts to have was quite challenging. I wanted a tiny piece of everything but they use a cake cutting tool to cut huge slices so that wasn't possible. I'd have to order six huge desserts to taste it all. Finally I settled on the passion fruit sponge cake since I'd never had gluten free sponge cake before. My husband chose the lemon cake with lemon icing. He loved his cake and I thought it was excellent but the sponge cake made me fantasize about playing (and winning) the lottery so I could fly to San Antonio any time I wanted. Shipping it frosted would not work well and the frosting was almost outstanding as the cake itself! I can not accurately describe how great this cake was except to say is was without a doubt the BEST gluten free cake I've had to date and after many cakes later on this trip, it still ranks on top! It was also the best sponge cake I've ever had, regardless of ingredients. Below is the lemon cake with lemon icing (not frosting which is fluffier) and under that is the my sponge cake - both side and back views. Isn't is gorgeous? It's hard to believe that it tasted even better than it looked! 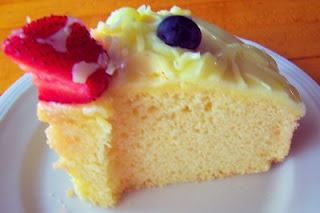 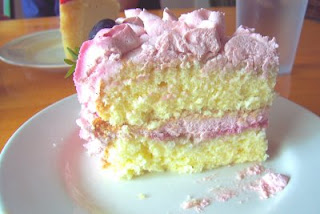 After a somewhat surreal lunch experience, Crystal told us how to get to the Riverwalk (she even wrote directions for us!) where there was a mall. I'd left my dress for the wedding in Atlanta so I needed to buy something - anything - to wear on Saturday night. We had couple of hours to kill before checking in to the B&B so it was all good. Well, except for the spending money on a dress that looked quite similar to the dress left in Atlanta part...lol! But the dress I found was on sale for $79 and it even came with a jacket I can wear later. My own black sparkly bolero style cover up (that I didn't forget to pack) worked fine with the new dress. So less than thirty minutes after walking into Macy's, we walked out with what we needed and the damage was not as bad as I was expecting. The husband was happy and we headed back to the parking garage to head to Chicken Paradise. More about that coming soon but just know that if you live anywhere near San Antonio you need to treat yourself to a stay there. A better lodging value you will NOT find in the state of Texas, whether you're gluten free or not!


Below is the cupcake display on the dessert counter and the Australian flag flies outside the restaurant, next to the USA flag. My only regret about our visit to LAB is that Rita (the owner) was on her way out when we got there. I didn't know who she was until she was gone. Thanks Rita, for giving gluten free people there a place to call home! 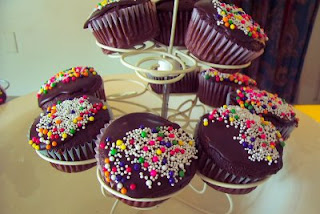 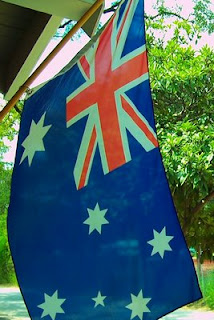